At the time I write this, Memorial Day is only a few minutes away.

I took some time to reflect on the Primary Campaigns that are white hot – with some winding down.

Terrorism – should be in the minds of people on Memorial Day. Memorial Day is a day to reflect on the sacrifices of our Military and the Current war we are in. Tom Campbell appears to be more concerned about Academia than America.

Campbell didn’t stop there – he went to the wall for Sami Al-Arian, proven to have ties with Palestinian Islamic Jihad.

He did “apologize” – but only after getting torched in the media. (never gave the money back, though)

Taxes – I have never encountered a Republican worse on Taxes than Tom Campbell. He is obsessed with Gas Taxes, wants to have a carbon emmission tax, tax the internet and raise income taxes – even with the economy we are in. Visit this post for links to all the information you could ever stomach about Tom Campbell’s tax plans.

Even Democrat Pollsters are confronting Reality about Carly Fiorina vs Barbara Boxer. Carly is the Front-Runner against Boxer at 45-42. Boxer is underwater on her job approval rating as well at 37-46… it means there is blood in the water.

Unfortunately, Tom Campbell had his chance. He got hammered by Di-Fi in 2000 and he lost a primary in 1992. He was running for governor and decided to bail out becuase he wasn’t going to be able to compete with Meg Whitman’s money.

Campbell’s primary argument is that his brand of Liberalism is going to be more appealing to California than Boxer’s.

Epic Fail – can you imagine what Boxer would do to Campbell? There is no contrast on Abortion, Guns and Gay Marriage.

So Boxer pops a picture of Sammy Al-Arian on the screen and people get to choose between some dolt that defends a maniac and an ego-meniacal Senator that railed on a General.

In addition – Boxer could flip-flop on taxes and talk about some Dem BS targeted tax cut crap and actually slip to the right of Campbell!

I could rant on about the nimrods in GOP leadership in California that think Campbell is a righteous dude – but suffice to say, sending Tom Campbell to DC would be basically business as usual from the Califorina Senate Seat.

Terrorism, Taxes and Talley – a trifecta of Epic Failure for a doomed candidate.

Californians for a Balanced Budget and a Better Economy – and a slate with a similar name featured “Conservative Republican” Abel Maldonado – sent a misleading peice of Cat Pan Liner on behalf of Tom Campbell.

It envokes Ronald Reagan. I am still appalled at the number of squishes that worked for Reagan. It says he was a trusted economic advisor to Ronald Reagan – was that when Reagan raised taxes in one of his first federal budgets?

It says on the back that Tom Campbell opposes tax increases.

Stop there – the rest of the mailer is now irrelevant.

The mailer is linked here and here.

It is a travesty that Americans for Tax Reform hit Campbell three times so early – but visit www.tomisthetaxman.com to find out why today’s mailer should be prosecuted as fraud.

Nice, huh? A lot has been made over how Chuck DeVore’s campaign being subsidized by the taxpayers.

Chuck DeVore himself just set them all ablaze.

What am I referring to? DeVore took his per-diem payment on Tuesday then had an Assembly Sargeant drive him to the Airport so he could fly down to Southern California to a debate on “John and Ken”.

By unanimous consent, the following Assembly Members were granted leaves of absence for the day:

Notice – no DeVore. While tax-raising Assembylmember Mike Villines waived his per-diem, DeVore did not.

Chuck DeVore holds himself out to a higher standard in his campaigning.

In any event – the taxpayers bought DeVore’s plane ticket that day, how nice.

Yet – when you look at the above – he looks like an Incumbent Assembly Politician… or better a Scum-Sucking Politician / Thief.

I don’t know if I’d get quite that dramatic – but I rather think I’d settle for the term Hypocrite.

That’s right. I am asking the question.

I am a Steve Poizner loyalist – I am voting for Steve Poizner, I have worked side by side with Steve Poizner. I have been pillaried by people paid by Meg Whitman and others with self-righteous personal agendas because of what I did on Steve Poizner’s behalf.

I make no apology for supporting Steve Poizner – look at the bumper sticker on the Mustang and the ad in the top Left corner of this blog.

So I don’t ask this question lightly.

Fact – the three polls I referenced earlier when I asked if Chuck DeVore should suspend all have Poizner down 22-35 points.

Fact – there are a ton of absentee ballots out there still. Many people have theories as to why, I will say that $100 million spent is the reason. People are confused.

Fact – Meg Whitman has led throughout the campaign, she has committed the resources necessary to win. (excessively so, but she has)

Fact – Poizner is a Moderate, Whitman is a Moderate. Naratelli and Ken Miller keep inching up in each successive poll. In this environment people don’t like Liberals that much – but Whitman’s message about Steve Poizner appears to have taken hold.

I have serious reservations about Meg Whitman. I have been outspoken in my criticism of her – for 17 months.

However, I am going to apply the same rule I am asking of the DeVore people to myself as it relates to Meg Whitman.

As a long-time Republican volunteer I have seen a number of campaigns – I am writing as one man. I am done attacking Meg Whitman – I see her as the  favorite to win and any further action only helps Jerry Brown.

Unlike DeVore – Poizner still has a chance to win, but honestly, it is faded.

I posted about DeVore first – knowing that I was going to write this post.

So I ask the question – Should Steve Poizner stand and salute? Or, should he fight to the death even though a 20-point loss looks likely? 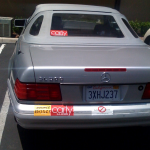 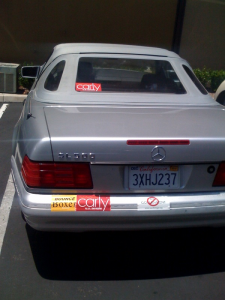 (The Above Picture was taken by Chuck DeVore outside the ElDorado County Tea Party Meeting. Some 600 people were in attendance and Carly Fiorina received a standing ovation at the meeting.)

Recently, we have been treated to DeVore emails touting a video relating DeVore to the “24” Series, vowing to fight on and attacking Carly Fiorina – the prohibitive favorite in the CA-Sen Race.

Chuck DeVore is attacking Carly incessantly through Blogs and Facebook – because he has no money to advertise. The fact that DeVore is not attacking Tom Campbell should give you pause as to his motive.

The Only poll that shows DeVore anywhere close is one he paid for.

The DeVore campaign will be quick to point out that there are a lot of Absentee ballots out there still. (Placer says only about 10% have been turned in)

I submit that this is due to the well-poisoning that is going on in the Guv Primary – people are confused about their choice for Governor.

Not Senate. Three Polls, all with almost the same numbers taken at almost the same time: 44-21 / 46-23 / 41-21 Fiorina over Campbell. Only in Chuck’s own poll did he break 16%. The support for Fiorina is not “Soft” support as has been asserted in the Governor Polling.

And now the DeVore campaign is rolling out Prop 26 from 2000 (sound familiar?) and using that to say that Fiorina is a Liberal. This can only help Tom Campbell – unless DeVore’s goal is to finish second for his own ego.

In addition the Prop 26 attack is hollow as Fiorina opposed Prop 39 (basically the same thing as Prop 26) a couple years later.

It is simply not statistically possible to get three polls with similar results at a similar time run by three outside firms – unless Team DeVore wants to espouse a conspiracy theory.

The evidence of a convincing  Carly primary Victory is compelling and substantial.

Therefore – it is reasonable and for the good of the Republican Party that I call on Chuck DeVore and Tom Campbell, for that matter to suspend their campaigns so we can focus on an enemy of America – Barbara Boxer.