Mike Garcia has a few problems. He has no name ID. He also has a T-Word Problem. I’ve looked at his social media and about a dozen campaign emails, not a single mention of President Trump by name. He is a Republican Refusenik.

Perhaps his consultants were taking cues from the Trump-Hating Steve Knight whose idiotic strategy in 2018 helped increase his margin of defeat. (ahem, even leftist polls show 95% GOP support of the President)

Allow your intrepid blogger to provide some unsoliticted advice.

Trying to look like a democrat when you are a Republican is idiotic. Democrats know who the real thing is (even if the democrat is a brainless marionette of leadership)

I am not so sure if in today’s world this is a wise move to advertise in one’s campaign. Perhaps Buck McKeon (Garcia’s top booster) has a Mitt Romney Complex?

John McCain has been outed as the conduit who sent the infamous dossier to the media once the corrupt FBI decided even they could not use it against PRESIDENT Trump. (say it Mike, I know you can do it)

Now – allow your intrepid blogger to give you two real world examples of Republican Leaders who understand the significance of 95% approval within the GOP.

If you look at Congressman LaMalfa’s social media, it has a lot of mentions of PRESIDENT TRUMP by name. (CA-01)

And here is Congressman McClintock (CA-04) with PRESIDENT TRUMP.

I’d like to thank the people forwarding me the CAGOP emails. once again, I have a yahoo account so there is some glitch where I don’t get them. Please keep them coming to [email protected]

Two conversations with political insiders indicate that the “smart people” still think PRESIDENT Trump (the “T” word) is a net negative everywhere in California. This is probably the reason why the mentions of Trump are only in a negative context.

It appears that Congressmen Tom McClintock and Doug LaMalfa missed the memo about Trump avoidance as both appear quite happy to wrap themselves in the Trump banner. (Good for them both for doing so)

Blogger’s Notes: The “T” Word is President Trump and the CAGOP is the actual party leadership, not legislative leadership.

A minimum level of involvement and regard, some of these knuckleheads that are running against him reconsider because Tom McClintock would not be vulnerable. Every time I see traffic reports about I-80, or Wildfires on Federal Land, I am reminded that McClintock can’t be bothered helping his constituents despite the heroic efforts of his staff.

Enter the latest Bay-Area transplant bringing her idiotic politics to Roseville. (Note every precinct except one west of Fiddyment went for Clinton in 2016 – which is where the Bay Area Liberals are moving to)

Meet Brynne Kennedy – a limousine liberal tech company exec. Brynne has scrubbed her social media in an attempt to cover her tracks for her run. (Never fear, we can find the 33,000 emails Brynne) What is on her social media is standard leftist democrat talking points – such as blaming insurance companies for wildfires, adopting talking points (similar to those of a local elected) against the Trump Tax Cuts, advocating for unrestricted abortion and of course playing the female card – insinuating male electeds are doing something wrong in the course of winning their election.

Tom McClintock does not need my help, or that of any other professionals, he will tell you himself. Unfortunately for McClintock, It looks like this “candidate” has access to some money. Brynne may need therapy to complete a normal sentence, so that may help McClintock more than any professional could.

It does not look like Brynne Kennedy is capable of independent thought – but HEY! She is a Woman so vote for her! You sexist pig… #FACEPALM #INPEACH Brynne for Congress!

Look for her announcement, replete with White Guilt and sexist politics soon.

P.S. Your intrepid blogger is aware that some local democrats are stirring to run for other offices, stay tuned as we have plenty of room for all of them on this blog. 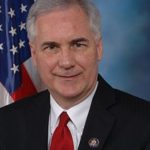 I am going to make this post short and sweet.

My issues with Tom McClintock are simple.

#1 He forgot the little people that helped elect him. He has been an enemy of the conservatives / tea party in local GOP Cent Com Politics. He publicly attacked Placer CRA when I was still in leadership of the CRA as one of several examples I could quote over the years.

#2 He has been hostile to local government, acerbic and has held a grudge against many of them for years over their support of his primary opponent in 2006.

#3 Other than #1, he has done next to nothing to build the party.

So why am I telling you to re-elect him?

In the last couple of years, I have had reported to me a seed change in McClintock’s treatment of local government. He appears to be engaging.

In 2016 when Doug LaMalfa and others were parsing their words over President Trump with regard to the Billy Bush video, Tom McClintock stood up and at personal risk told everyone to grow up and support the nominee. Doug LaMalfa never came out and told people to vote for Donald Trump, Tom McClintock did. By doing so, Tom McClintock played a role in building the Republican Party in addition.

While McClintock was a reluctant Trump Supporter (remember, I personally did not heave to until Dr. Carson endorsed Mr. Trump), unlike Congressman LaMalfa, he did not have staff or consultants participating in the #NEVERTRUMP effort.

Tom McClintock also left the freedom caucus, recognizing that he was marginalizing himself by always letting the perfect be the enemy of the good. As such, Tom McClintock has been a reliable vote for the agenda of President Trump. Did Tom McClintock squish out?, not even close. He has been part of the crew reminding the President of his base, by getting out from under that yoke, Tom McClintock is building the Republican brand in a positive way.

Tom McClintock has been attacked for doing his job. Witness the losers in the Sacramento Bee with their #FAKENEWS and blatant bias villifying him for invalid reasons for years and their recent tacit support for the violence at his recent town hall meetings. Yet, Tom McClintock still soldiers on continuing to do town hall meetings knowing that crazed moonbats are going to show up in a vainglorious crusade to get the Bee and other liars to give them media coverage. 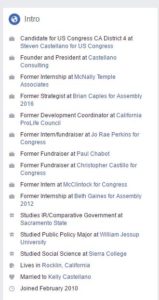 So, I got communication from another “New kind of Republican”, that we NEED apparently.

We need to add the UK to NAFTA – how about we wipe our ass with NAFTA all together?

He has a Master’s Degree, McClintock has a BA. I have no college degree and I am just fine thank you.

He advocates for National Crime Standards and National Regulation of Health Insurance. #EPICFAIL

Then there is this – he is a former Bethypoo and McClintock intern. He has also “worked” for a litany of losing candidates… with a special nugget…

He worked as a “strategist” for Brian Caples who lost 2-1 to Kevin Kiley. Apparently, Mr. Castellano was so adept that he helped Kiley win by a larger margin than his former benefactor (Bethypoo) ever did. #EPICFAIL

Dear Stephen, stop now. Go away. Tom McClintock is far better on his worst day than you will ever be on your best day.

Stay Tuned. Right On Daily may have a new sock puppet to beat on. 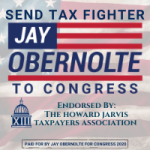 Sign up to receive RightOnDaily updates delivered to your inbox.