Derobah Pauly is well-known for having political Tourette’s Syndrome. The list of people she hates and rages on goes far beyond your intrepid blogger. I am not sure years of therapy and an exorcism would help Pauly.

Later, Pauly claimed her remarks were aimed at two of the event’s speakers who she alleged were terrorists. But that did little to satisfy critics. Hundreds of people from various ethnicities and faiths protested at Villa Park City Hall, calling Pauly’s remarks bigoted and Islamophobic.

This isn’t the first time Pauly has had a run-in with police involving alcohol. In 2012, her husband James tried to evade a police DUI checkpoint in Orange, but instead crashed the car he was driving, also a Porsche, into a curb and was arrested for drunken driving, the OC Weekly reported.

During that arrest, James Pauly tried to slip off his handcuffs, and Deborah Pauly asked to drive the Porsche home, according to the Weekly. But police refused the request because she appeared to be drunk, the Weekly said.

When reached for comment, Pauly said she didn’t want to discuss the circumstances of her accident this month because her DUI case is still pending.

However, she did acknowledge making comments during the police encounter that could have been construed as anti-Muslim.

At first, she said it’s “absolutely not true” that she made anti-Muslim remarks the night she was arrested. But when asked if she said something that could have been interpreted or misconstrued as anti-Muslim, she responded, “it was 9/11,” referring to the anniversary of the terrorist attacks.

Someone want to tell me why a Villa Park Councilmember was in a residential neighborhood at 1:24AM near the 91/I5 intersection? And, note – shortly after this 2015 DUI, Pauly and her husband of 32 years split.

2 wrecked Porsches later – it was a Mazda Pickup that was the undoing of Mz. Pauly. 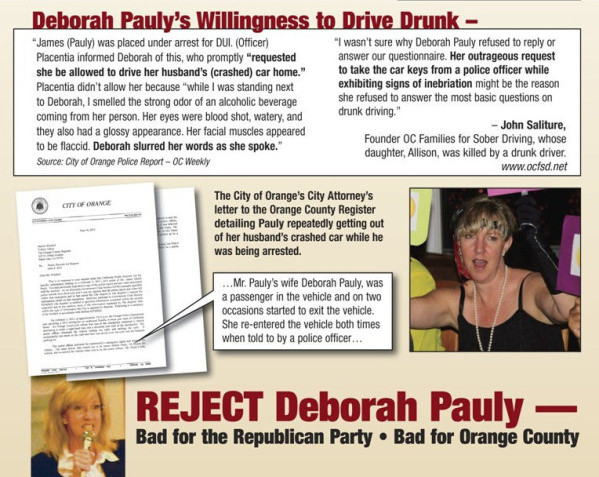 Pauly hates OCGOP Chairman Fred Whitaker and is known for inciting fights and drama at OCGOP meetings because the voices in her head tell her to. It is ironic, as it has been put to me that Whitaker is also a top booster of CA-45 Candidate Don Sedgwick. Politics does indeed create odd coalitions.

In addition – in the few years I have been tracking the crazed Deborah Pauly, she has run for AD-68 and OC Supervisor.

It appears that Mz. Pauly has a fan club 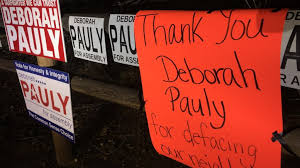 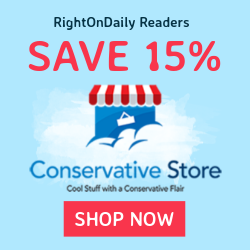