For those of you that read this blog, one of my pastimes is weasel-stomping.

One would think that a made man like Mike Madrid who just got done ripping off Antonio Villariagosa for six figures would be in escrow for a new spread in Bel-Aire near his former client.

Instead, Madrid is reduced to renting space in his head to your intrepid blogger. It also looks like some dem consultants are enabling his psychosis.

If I was a dem consultant, I’d feed Madrid more Kool-Aid for his rampage.

As a reminder – from our first post on Mike Madrid:

For a small sum, a democrat can purchase the services of Manchurian Republican Mike Madrid. And part of the “Value” you will receive is him venting his frustration on straw men so he does not have to own responsibility for making a horrible life choice. It is much easier to declare the GOP dead once you’ve gotten your 100,000 pieces of silver, and easier still when you have to cover your bruised ego from losing to someone you outspent 4-1, failing to reach 20% of the vote with a combined aggregate for $50MM spent.

Mike Madrid is seeking to participate in the Chad Mayes / Kristen Olsen Narcissistic Rage, cloaking their feelings of inadequacy and irrelevance in the old tired rhetoric of the move left GOP crowd.

Madrid also went on to attack both John Cox and Travis Allen – which makes sense as their performance in the Primary was humiliating to Mr. Madrid. (ahem, Travis Allen finished a very close 5th to Villariagosa’s 3rd… and John Cox finished a strong 2nd) The focus of his attack was immigration politics, a go to for GOP Critics to use in order to cloak other personal issues. 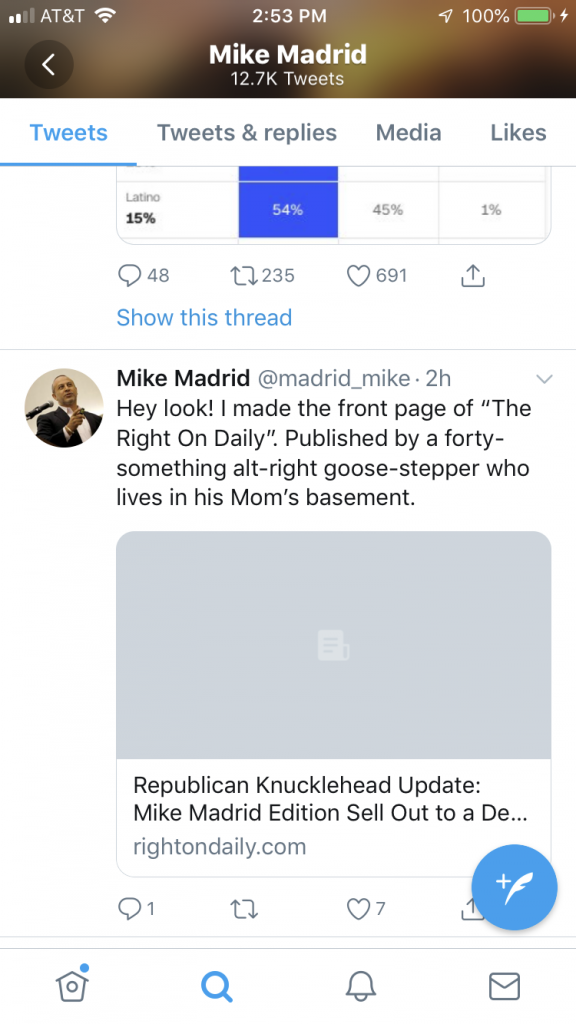 Madrid should also know a few things about Immigration – witness a past campaign he managed: (Mike Madrid Ran John Geranios’

Ask Republican John Geranios why voters should elect him to represent the 43rd Assembly District and he starts gushing.

“I’m the absolute dream candidate for this district,” he enthusiastically explains. “I’m a perfect match for the values of the voters here. . . . I’m fiscally conservative and I’m anti-illegal immigration.”

$1ooK+ can buy a conscience it appears.

Madrid was a past executive director for the California GOP and he easily and without reservation promoted candidates with positions that today have him calling everyone a racist. In the case of your intrepid blogger – Mr. Madrid called me a Nazi.

Every psycho needs enablers. In the case of Mike Madrid, most of his enablers are dem consultants that know he is a useful idiot and are playing his ego fueled rampage to the hilt.

However, it looks like the LA Times approves of calling your intrepid blogger (see the reporter – Javier Panzar) a nazi as do two top California Democrat Party Consultants – Steve Maviglio and Garry South who studied English in Bejing.

What is a fun and humorous addition is Luis Alvarado, long given an exemption for his visceral hatred of Donald Trump because he is a “Nice Guy” – well here he is in all his glory. It looks like I may be following up on Mr. Alvarado soon. Alvarado is a follower of Mike Madrid who is the unstable ringleader of the rampage against anything Republican in California.

Stephanie McGann Jantzen was Roger Niello’s campaign manager when he ran for State Senate in 2010. I supported Niello’s opponent

due 100% to Niello voting for what was then the second largest tax increase in State History. This was the state budget that led to Anthony Adams being recalled from the Assembly. Niello also supported Proposition 14, the Jungle Primary initiative that has created numerous democrat versus democrat general elections.

Her presence on this list of people calling your intrepid blogger a nazi indicates there is a 10 year old grudge. This is common in the world of politics. Included for your enjoyment is a photo of me astroturfing a Roger Niello bus stop. Apparently, this scarred Ms. Jantzen for life, or perhaps supporting lower taxes and smaller government makes one a Nazi.  (BTW – Roger Niello has moved on and we’ve had at least one good chat in the intervening years)

Scott Lay even jumped in on the action. He is a democrat operative with a following, this is not his first time calling me a racist / nazi in order to gain political advantage. Apparently, this is a thing for liberals.

So far this year, your intrepid blogger has received 2.2 Million visits on the RightonDaily Blog. I’d sincerely like to thank the top democrat consultants, the LA Times and the Republicans nursing grudges for the promotion. Hopefully, 2019 will be an even bigger year for Right on Daily.

Mike Madrid needs professional help, that is clear. Anyone enabling him is complicit in the psychosis. All of this comes with consequences.

in the Meantime your intrepid blogger is living #RENTFREE in the heads of more weasels.

One Response to “Republican Knucklehead Update: The Sad, Shrinking World of Mike Madrid – Goosestepping off the Edge”