Placer GOP Chairman Dennis Revell stood up. He basically called Dave Gillard and Kevin Kiley out for violating the California GOP trademark The soundbyte from Dave Gilliard was priceless as well. Well done, Dennis Revell, thank you for standing up for the integrity of the GOP.

The KFBK Story is linked here for now

Where was Kevin Kiley with his glibb lawyer comebacks? Why did Gilliard have to respond?

The story also took on Gilliard and Kiley for their claims that Republican Party leaders are uniting behind Mr. Kiley. It is the only card they can play at this point, I get that – but it is still a lie.

KFBK’s story covered both the deceptive use of the Republican Elephant and the messaging of Kiley’s mailers and Walk Pieces. The story concluded by reminding listeners that Kiley has not been endorsed by the GOP at any level… ‘

… which is another theme. Pete Wilson’s lawyer’s son works for Kiley, the California Republican Taxraisers Association is purchased and the Small Business Association also endorsed three other candidates. The GOP endorsement appears to not be available on amazon.com, or done in triplicate – therefore Mr. Kiley was unable to obtain a copy.

Dave Gilliard is an outstanding and effective Republican Consultant. This is not one of his finer moments. Young Mr. Kiley is not acting quite as confident these days.

OF MISLEADING MAILINGS BY ASSEMBLY CANDIDATE 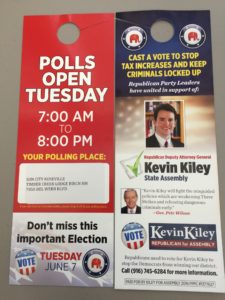 “The Republican Party has not endorsed any Republican candidate in this race,” Sweeney said. “None of the three county party committees that cover Assembly District 6 have made any endorsement or is urging voters to cast their ballots for any candidate. The state party has made no endorsement.”

Mr. Sweeney’s comment comes after an Assembly candidate published mailers and handouts that use a Republican elephant logo and claim that ‘Republican Party leaders have endorsed’ one candidate and urged voters to cast their ballots for him.

“These statements are misleading and the use of the Republican Party logo is an effort to confuse and mislead voters,” Mr. Sweeney said. “It’s regrettable that any candidate would mislead voters with these kinds of representations.”

From the website of Govern for California Action Committee is this Gem:

Upon closer inspection, Californians would learn that the missing ingredient is courage. In the case of Democrats, courage means the willingness to buck narrow special interests seeking ever-greater shares of government spending at the expense of programs, taxpayers and private-sector job growth. In the case of Republicans, courage means the willingness to buck no-tax groups who, even when presented with all the reforms they seek, refuse to acknowledge that sometimes more revenue for the government can produce better outcomes. And in the case of all legislators, courage means an unshakeable dedication to honest budgets, truthful accounting, open government and governing for the people rather than for personal gain or narrow interests.

Now, it becomes clear why a 31 year old who has been unemployed for over a year – using a ballot title he may have dubious claim to is getting spent on so lavishly. Kiley was remiss to sign the no new taxes pledge. Did he really mean it when he signed it? Should we save copies of his campaign flyers to remind him of it when he votes to raise our taxes as an assembly-member?

Govern for California went on a late spending rampage with $203,000 in support of Kevin Kiley after young Mr. Kiley started getting nailed for taking over $200k from them as an intermediary. Kiley has little, if any real support in the district and it is safe to say that he has had 2/3 of his support raised (or spent) for him by this committee.

David Crane the principal of Govern California – who appears to be on an ego-fueled rampage driving the late, furious Independent Expenditure is a democrat who worked in the Arnold administration. Like many wealthy people, he appears to have very thin skin and appears to have determined that it is time to teach us little people a lesson for merely pointing out accurate facts about him and his other donors.

If you think I am off base – then ask why Crane featured himself in one of the mail pieces he sent on Kevin Kiley’s behalf. This is a clear indicator of his ego being bruised as a result of the scrutiny. How could you not conclude that this group of bay area liberals are attempting to install a marionette in one of the most conservative assembly districts in California?

The antipathy for strategy and the hubris that has driven at least 5 of the candidates on the #AD06 Ballot who have no path to victory to file in this tilt has created the perfect storm to enable such a group to try to flex their muscles and defraud the Conservative AD06 out of representation once again. Kevin Kiley has been caught multiple times saying different things to different groups of people, how will we ever know what he believes?

Another likely outcome is that this late flurry of spending will halt the momentum of Bill Halldin or Andy Pugno to finish in the top two, thus setting up a dem vs dem runoff this fall in the 47% Republican District. Since Crane is a democrat, I am not sure he’d be sad if his money helped create that situation.

David Crane is profiled on Wikipedia. You will notice that Mr. Crane was on the California High Speed Rail Advisory Board – you’d sure think this is a reason why young Mr. Kiley attempted to split the baby on the High Speed Rail issue. His main benefactor is completely sold out to High Speed Rail. Kiley says in the on line version of the Bee’s Candidate Page that HSR is “Very Unimportant” to him, while claiming to oppose it!

I have no clue what the outcome of the AD06 election will be – but I do know this, should Kevin Kiley make it over Andy or Bill, he has a lot of explaining to do beyond telling people what they want to hear.

I am a dirty, rotten, mean racist.

I just can’t help but marvel at the stupidity of Victor Bekhet, along with his personal corruption.

Victor is the business owner with an expired LLC and an expired securities license AND an illegally placed Double Wide on his property. Get the theme? He does not pay his bills… and his main supporters are Republican and Tea Party leaders.

Hey, who cares about character when you have a score to settle! Debra Jackson, Ken Campbell and other accomplices that may or may not include the CRA’s Pol-Pot Bellied Information Minister Thomas N. Hudson and Placer GOP Chairman Dennis C Revell are supporting this guy.

Victor Bekhet just recorded his own robocall. Please listen at your own risk. When done, please laugh your — off like I did. Then, google psychiatrists in the area to connect his supporters to.

Bekhet is going to get stomped. 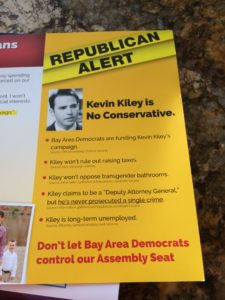 I mean this was EPIC. Joe Justin’s Mail for Bill Halldin has been outstanding all across the board. But in this case, the Andy Pugno / Jeff Evans combination fired on all cylinders.

I focus on points 4 and 5: Kiley claims to be a “Deputy Attorney General”, but he’s never prosecuted a single crime. (#EPICBURN)

Kiley is long-term unemployed. (which is also true as he has been unemployed for over a year)

Pugno, who has been getting blasted with at least 6 mailers himself just unloaded on Kevin Kiley – just as Kiley was getting a bailout from his Bay-Area Liberal Handlers.

This race is going to be a complete train-wreck until election day.

Bonus – Pugno has been hammering Kiley over his opposition to Prop 8 as well – rightly pointing out that Kiley is remiss to take a stand on transgender bathrooms. Given that most people are worried about their safety and future – IMO the fact that Pugno unloaded on him for being an unemployed prosecutor with no criminal justice experience is more devastating than the social issues attack is. 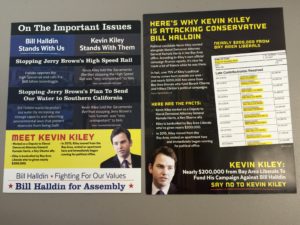 Not to be outdone – the Bill Halldin Campaign did their own excavation of the Kiley Potemkin Village Campaign:

It highlights how Kiley moved to Rocklin in 2015 and rented an apartment, then immediately started running for office.

And of course – it points out that Kevin Kiley is a deputy of Extreme Left-Wing Attorney General Kamala Harris.

Young Mr. Kiley has been hit 6 times. (Not counting the beating being administered on social media) No wonder why the Bay Area Liberals had to attempt a last minute bailout. Liberals love bailouts. 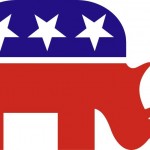 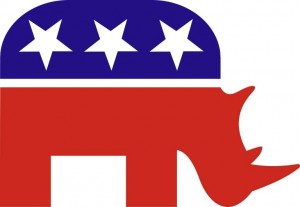 The Govern For California Action Committee has this to say about the candidates they prefer:

Upon closer inspection, Californians would learn that the missing ingredient is courage. In the case of Democrats, courage means the willingness to buck narrow special interests seeking ever-greater shares of government spending at the expense of programs, taxpayers and private-sector job growth. In the case of Republicans, courage means the willingness to buck no-tax groups who, even when presented with all the reforms they seek, refuse to acknowledge that sometimes more revenue for the government can produce better outcomes. And in the case of all legislators, courage means an unshakeable dedication to honest budgets, truthful accounting, open government and governing for the people rather than for personal gain or narrow interests.

It is clear that the sustained attacks on Kevin Kiley’s real issues have gotten a response from the Bay Area Liberals that have financed Kevin Kiley’s campaign.

I am not sure why the oligarchy funding Mr. Kiley’s effort figured that the suburban, conservative district would take well to a recent transplant from San Francisco, funded by San Francisco running for Assembly. (Remember, Kiley moved to an apartment in Rocklin on 5/14 and declared his candidacy on 5/27/2015).

The Govern for California Action Committee has come in with the following:

The size and scope of the expenditure suggests and emotional or panicked aspect to the effort as well as an attempt to shotgun blast to the entire electorate.

Please further note that this committee is the intermediary listed on Kevin Kiley’s report that is responsible for at least $200,000 out of the $250,000 of Bay Area Liberal money Kiley has raised.

It is a fair question to ask – what did Kevin Kiley promise these Bay Area Liberals in exchange for their support?